Discover the Importance of Offer Letter When Applying for a Job 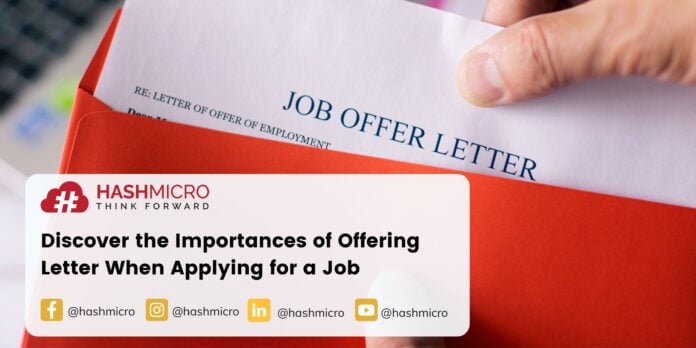 After struggling to apply for jobs and going through a lengthy recruitment process, you’ve finally received an offer letter. This letter is the thing most prospective employees expect when applying for a job. When you receive an offering letter, there are several things you must do. One way is to review the offers you received. But even if you receive this letter, you are not officially be the part of the company. Why is that happen?

The offer letter is an official notification stating that a company select you to join them as a new employee. This letter also explains the rights and obligations of the employee after the approval stage of all the requirements during the initial recruitment phase. An offer letter also helps explaining what the company expects from its employees.

This letter will help potential employees understand their rights and obligations while working. Company can offer the the job verbally. However, to avoid misunderstandings that might occur in the future, it is necessary to have official evidence to understand and agree on their respective roles.

Contents of the Offer Letter

Offering letters usually contain information about positions and jobs previously discussed during the interview, via telephone calls, or in person. Each company may have its terms and conditions. However, the most basic components of an offer letter usually consist of:

At the end of the offering letter, there are usually two columns for signature proof of engagement. One column is for the company, usually signed by the HRD representative or company leader, while the other is for the new employees.

By signing an offering letter, a potential employee has not officially become an employee in a company. A person will officially have the status of an employee after signing a work contract on the condition that legality is in the form of stamp duty. Company usually send the employment contract after the employee and the company sign the offer letter. Manage all of the company documents with a cloud-based document management system from HashMicro.

An offer letter is an official notification stating that a company select you to join them as a new employee. This letter can symbolize an agreement between the company, the employer, and the prospective employee. Therefore, it would be terrific if you received an offer lettering to send a reply as soon as possible to show your seriousness and professionalism to the company.

HashMicro, as the best ERP Software provider company in Singapore, is here to help your company’s operational efficiency. Our HRM system makes it easy for you to manage job portals, resumes, candidate tracking, screening processes, communications, and test schedules, in one automated and integrated platform.

KPI as an Indicator to Assess Employees Performance

The Importance of Improving Interpersonal Skills

Incentive Is: Purpose and Benefits For Employees